Sure you have a lot on your plate, but leave room for your salad.

A blog for owners & managers of litigation support businesses by experts on using technology to improve your profitability, efficiency and effectiveness in a unique marketplace.

Moving to RB8 Cloud: ‘a no-brainer’

[NOTE: This product has been replaced by RB9.]

Christine Phipps started Phipps Reporting 6 years ago and grew it rapidly from a single location to multiple offices across the state of Florida with RB8 as her management system. She recently switched to RB8 Cloud with a little nudge from a big hurricane named Matthew. She wanted to share her story to help other RB users disaster-proof their businesses: 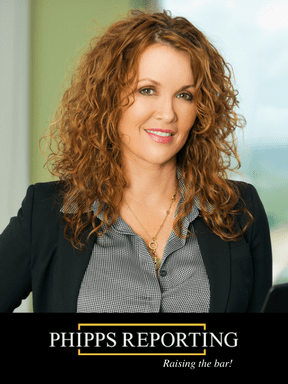 Phipps Reporting has been on RB8 for 6 years, and owner Christine Phipps was an RB fan from the start.

“I’m so fond of RB from the beginning. Thanks to Ted [Yoo, OMTI Product Specialist], I got my company off the ground in 4 days and was able to immediately propose to six large cases the first week my company opened, which was critical to my company getting off the ground.”

Phipps Reporting grew quickly from there. Within 4 years, it was one of the biggest firms in Florida.

When it came time to get a new server recently, Christine considered subscribing to RB8 Cloud instead, which moves your RB8 system to Microsoft Azure’s cloud platform, eliminating the need for your own server.

“My head of IT proposed different financial scenarios. I wavered at first because of the thought of our growth, and the financial impact that may have in the long run. We have offices across Florida, and we have our data in-house. I knew that as we had more data in the cloud, RB would charge us more.

“But I decided to make the move because RB8 Cloud is actually more cost-effective: Because a new server is very expensive, particularly when you include the maintenance, in order to properly control ever-changing security, updating, and redundant backups.  The other deciding factor was the ability to eliminate the tether to our local Internet Service Provider and to enjoy complete uninterrupted service to our customers.”

A Category 5 hurricane, Matthew landed in Florida, Thursday afternoon, 10/6/2016, ahead of which the governor had ordered a mandatory evacuation for everyone in its projected path, which included Phipps Reporting’s main office. “Because of the hurricane, we had to close the office. I paid all my employees to stay home Friday. If we had RB8 Cloud, I would have been operational that Friday – I could have been operational serving clients during the hurricane.”

The need was there: “We were getting calls from out of state, Texas and Pennsylvania. People had forgotten that we were in a hurricane.”

“If I hadn’t hemmed and hawed, we would have been completely secure from imminent natural disaster, and employees in non-impacted areas of the state could have continued to work, and we could have realized true uninterrupted service while our corporate headquarters rode out the storm.

“We work in a different world now. People say, ‘I don’t care if you’re in a hurricane, I need my exhibits.’ If you’re in business, you have to be open 24/7 365 days a year, natural disaster or not.”

With the evacuation order lifted, OMTI was able to switch Phipps Reporting to RB8 Cloud over the weekend. Their IT technician is happy to be on the cloud, and Christine agrees: “Moving over to the cloud was a wonderful thing.”

An immediate benefit for Phipps Reporting was eliminating the need for that new server and all the expense and upkeep involved. They can also look forward to better disaster recovery the next time something happens — whether a natural disaster or man-made — because with RB8 Cloud their RB data is mirrored between 2 servers: If one goes down, the other takes over immediately with no downtime and no lost data. In fact, Microsoft guarantees a 99.95% uptime.

RB8 Cloud also offers a more secure environment than an in-house system since it’s on Microsoft Azure’s Cloud Services, which have security and privacy safeguards beyond what any court reporting agency could provide. And because the file repository is also part of RB8 Cloud, all of their case files are just as safe as their RB data.

Christine is convinced RB8 Cloud is the best system for running her business — or any court reporting business, so she asked us to share her story. “Luckily for us with hurricanes, we have 4-5 days warning; but in places like Tornado Alley, or where there are volcanoes, earthquakes – moving to RB8 Cloud should be a no-brainer.”

She hopes that, unlike her, you will move to the cloud before the next disaster hits — or you invest in another expensive server. Contact RB Sales today.

This website uses cookies to improve your experience while you navigate through the website. Out of these, the cookies that are categorized as necessary are stored on your browser as they are essential for the working of basic functionalities of the website. We also use third-party cookies that help us analyze and understand how you use this website. These cookies will be stored in your browser only with your consent. You also have the option to opt-out of these cookies. But opting out of some of these cookies may affect your browsing experience.
Necessary Always Enabled
Necessary cookies are absolutely essential for the website to function properly. These cookies ensure basic functionalities and security features of the website, anonymously.
Functional
Functional cookies help to perform certain functionalities like sharing the content of the website on social media platforms, collect feedbacks, and other third-party features.
Performance
Performance cookies are used to understand and analyze the key performance indexes of the website which helps in delivering a better user experience for the visitors.
Analytics
Analytical cookies are used to understand how visitors interact with the website. These cookies help provide information on metrics the number of visitors, bounce rate, traffic source, etc.
Others
Other uncategorized cookies are those that are being analyzed and have not been classified into a category as yet.
SAVE & ACCEPT